When we are defining some actions to be performed in the profile editor, we need to choose a reason, i.e. the specific input event that will cause the actions to be triggered. Here is some further information about the different reasons. 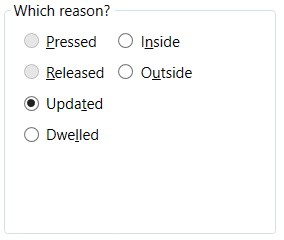 Alt Controller also offers the event reason Dwelled. This means that the actions are triggered when the mouse pointer has remained inside a screen region or over a custom window button for a certain amount of time. That dwell time can be set in Tools – Options – Timing. Dwell actions do not repeat – they are performed at most once for each visit of the pointer to the region or button. 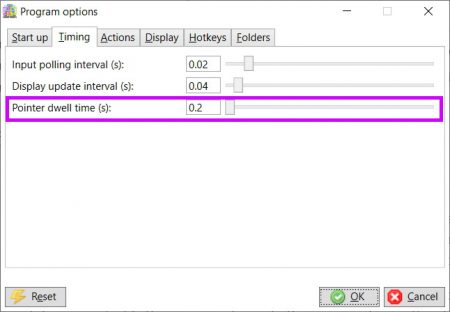 The final reason for actions to be triggered is Updated, which only applies to the mouse pointer input. This allows key press actions to be performed repeatedly while the pointer stays within a screen region. It is primarily used to create steering controls for racing games where the rate at which the key to steer left, steer right or accelerate is pressed is updated continuously according to the position of the pointer in the screen region.